For the past two years the loss of revenues from downtown businesses affected by the economy has been downloaded onto businesses outside the downtown core. In 2017 and 2018 City Council used money from savings to cap business tax increases at 5% to protect businesses. In 2019 it has become clear that the recovery of our downtown core is not imminent and continuing to borrow from savings to address the problem is no longer sustainable.

Beginning last fall the Kensington BRZ began to work hard to raise awareness of this situation through research, testifying before Council, and networking with other BRZs. In February Kensington and 10 other Calgary BRZs began collaborating to advocate for solutions to a more balanced ratio for tax distribution. We have participated in surveys, letter-writing campaigns, attended stakeholder meetings and workshops with other groups like the Chamber of Commerce and Calgary Economic Development, as well as a meeting with the City Manager and a meeting with the Mayor and other stakeholders.

Together the BRZs represent a powerful voice. BRZs account for approximately 5,000 businesses operating in Calgary. Eleven of these are outside the downtown core in Calgary’s most vibrant, active business districts. We employ upwards of 55,000 people. A sudden, disruptive tax shift to our members would cause untenable strain on the mostly small businesses that are already facing numerous financial challenges due to recent changes in labour and energy costs.

One of the key solutions the BRZs and other stakeholders proposed is to gradually shift this burden from the non- residential tax portion (landlords and tenants) to the residential portion to achieve a more equal sharing of the tax burden. Most City councillors already agree that residential and non-residential taxes need to be re-balanced. The timing (over how many years the shift will occur) and the degree (what will the new balance be) remain to be decided.

The BRZ executive directors have done a great job advocating on our members. 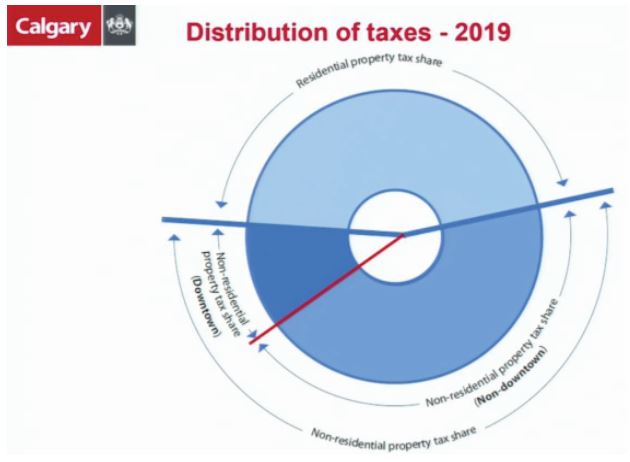 Now, Council and City administration are working hard to come up with a solution for 2019 to address the unfair tax burden that was downloaded onto businesses outside the downtown core in 2017 and 2018. While the final decision for 2019 non-residential/residential taxes will not be made until April 1st some likely financial tools that Council will use are:

Both immediate (2019) and long term solutions are being researched, including learnings from other cities that have experienced similar financial crises. I will provide an update in mid-April.