Exciting news! After years of work, City of Calgary Council has committed $4 million to fully fund the Bow to Bluff Public Realm Plan.

The Bow to Bluff plan began as a citizen-led initiative focused on transforming the neglected spaces along the LRT line between the Bow River and McHugh Bluff into a green necklace of mini-parks. Out of this award-winning engagement process a design that focused on community vibrancy, safety, and beautification was created. With Bow to Bluff identified as the top public improvement in the Hillhurst-Sunnyside Area Redevelopment Plan, the Community Association pushed hard to secure funding to make this remarkable vision a reality. 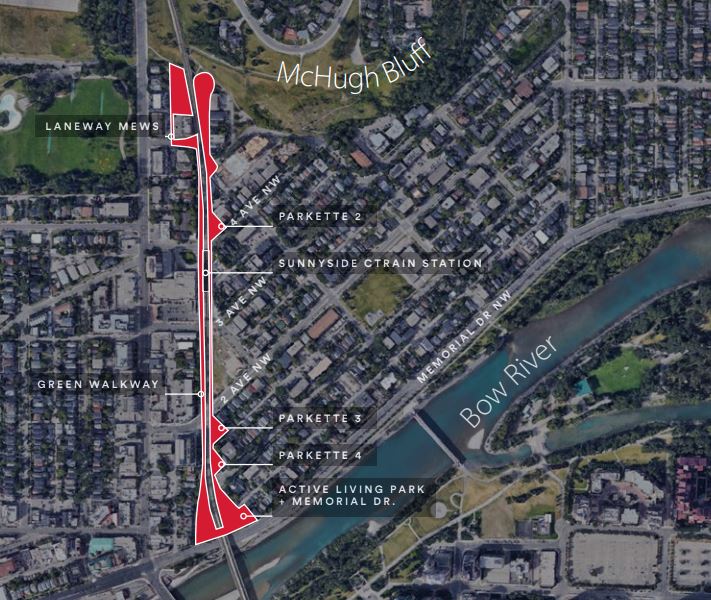 At the recent four-year budget debate, Council supported creating a new $8 million Leveraged Partners Program for parks, where projects that already have private sources of funding can qualify for a top-up.

The City’s Parks department had already secured $840,000 for Bow to Bluff and The Hillhurst-Sunnyside Community Amenity Fund (HSCAF) was identified as a further source of funding. The HSCAF receives money from area developers in exchange for increases in density, with the expectation that that money go toward public improvements that benefit both current and future residents.

With the existing Parks funding, HSCAF funding and $2.6 million from the Leveraged Partners Program committed to the Bow to Bluff project, the full $4 million funding ask is fulfilled.

This means Bow to Bluff will now move forward, bringing a great new public amenity to the communities of Hillhurst and Sunnyside, the nearby shopping district of Kensington, and providing improved access and park areas to the residents and many visitors to the area.