A revitalized Plaza Theatre will reopen its doors in mid-September

For years, David and Fatima Allie Dobrowolski would watch movies at the Plaza Theatre and talk about what they would do if they ran the historic independent cinema.David, who was born in Calgary, had been going since he was a child. Fatima had been going since she moved to Calgary with her husband in 2014. The family lives 500 metres away from the theatre.
“It was never a real thing, it was just a dream,” says Fatima. “We just felt that so much would have to happen for that to ever become a possibility.”
In May 2020, the couple’s third child was born. Fatima also had to sell her family home in her native U.K. Shortly after wrapping the sale, the couple noticed the “For Lease” message on the Plaza’s marquee. 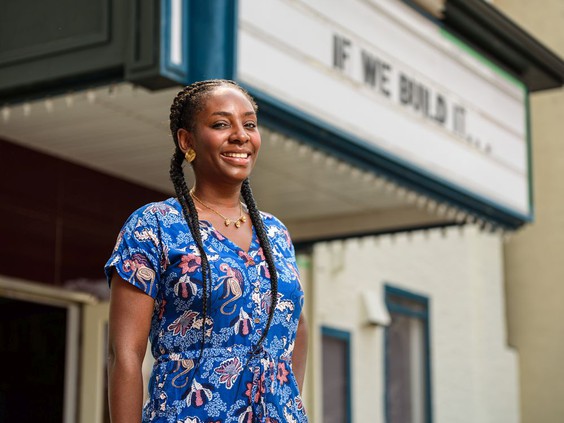 “It felt like a bit of sign, that this was what (we) were supposed to do,”  says Fatima. “It was a big decision, but it had been something we had been thinking about. All of sudden, just in a week, it all became possible.”

The Kensington theatre closed its doors in August 2020 after struggling to stay afloat during the early days of the pandemic. The owners put it up for lease with the hope that someone would step up and continue operating it as a movie theatre.

For months the marquee has read, “If We Build It …,” an appropriately cinematic reference to the film Field of Dreams that had local cinema-goers intrigued.

Fatima is now the long-term leaseholder and is overseeing renovations to revitalize the 86-year-old theatre with plans to have it reopen by mid-September.

The programming will remain much as it was, concentrating on art house and independent cinema and second-run mainstream films. Fatima said they also hope to re-establish ties with organizations such as the Calgary International Film Festival and the Calgary Underground Film Festival, which both have histories running events at the Plaza Theatre.

“We would visit the Plaza all the time,” Fatima says. “I always liked the programming. I felt that even if I hadn’t heard of the film, because it was playing at the Plaza, it meant it was something you should give your time. I always loved theatres. I know people say you can watch everything online. It’s true, but I don’t think the experiences compare.”

Still, the plan is also to transform the theatre is a bit of a community hub. There will be an overhaul of the concession, a new café, a patio and a speakeasy-style cocktail bar. It will also have a permanent food truck outside, which Fatima hopes will feature a rotating lineup of local chefs offering a wide variety of food that can be brought into the theatre.

“We want to expand into a bit more into doing family shows on the weekend and to really build the experience part of it,” she says. “As a single-screen theatre, you can’t really say you’re going to compete with Cineplex or Landmark or the huge ones because they do have several screens, they can hold onto films for a lot longer. For us, (we thought) if we took over this business we would be building an experience aro

The theatre will also be a work-in-progress, with further renovations happening in stages. While the couple has never owned a theatre before, they do have a history of entrepreneurial pursuits. David owns an investment firm, while Fatima’s background is in branding, marketing and property development.

“Traditionally, the Plaza worked with a lot of festivals and screenings with the universities,” Fatima says. “People booked it out for weddings or company events and we really want to build on that legacy and make it a place where people are building memories going forward.”

A new website with a “frequently asked questions section” has been set up at theplaza.ca and social media accounts have also been rebooted. Visitors are encouraged to subscribe to the Plaza’s newsletter for updates.

und it that you don’t really get in other places.”

“They are great venues for independent cinema to get screened. You are competing for Landmark and Cineplexes and with the big titles that are getting wide release. It’s harder for smaller, international titles to find a place. So independent cinemas have been great for that. I think they are really important for the festivals and the community, and even just for regular movie-going experiences. I’m excited the theatre is going to be revitalized and open again.”