Calgarians itching to enjoy a cold drink in the hot sun with some great spring weather today might have another way of doing so shortly, as the city will be looking at extending patios again.

The patios were a hit last year, helping people fill up Calgary restaurants amid COVID-19 restrictions, and we will likely see the return of extended patios this spring and summer, as discussions will begin later this week. 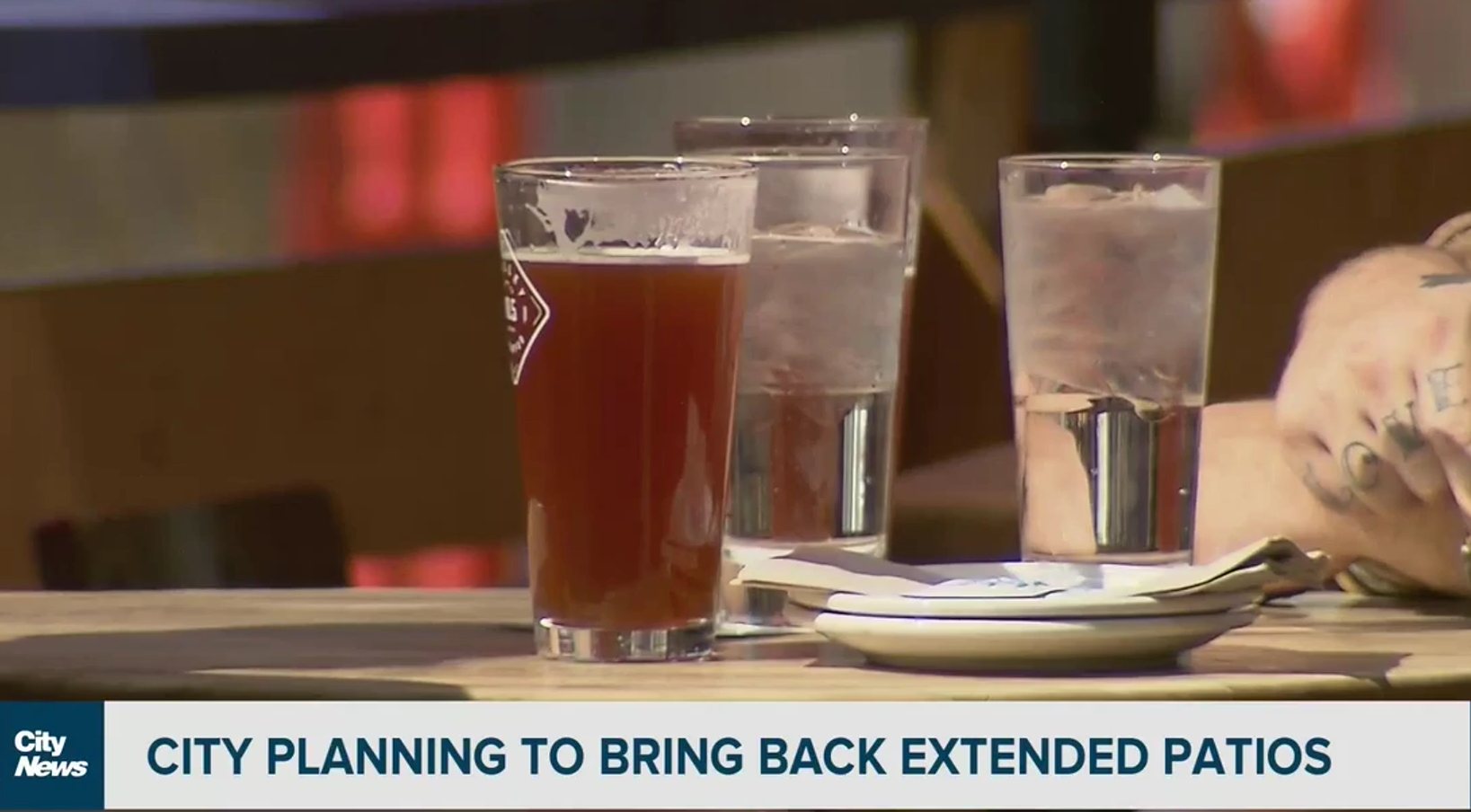 Ward 9 Councillor Giancarlo Carra says he also wants to try and make the program free once again so businesses can spend more money on beautifying the areas.

Also, the plan could see the patios moved into existing parking lanes leaving the sidewalk free for people to walk through, reducing accessibility concerns.

While convenient for people looking to enjoy the sun outside a restaurant there was a downside to the patios, as we remember the orange barriers and shoddy ramp systems.

“Yeah, we’re not going to see any more of those orange barriers or those annoying ramps,” says Carra.

“Those ramps that we have are seldom in place. you have to make your way down onto the street around and up and those orange fences are ugly.”

In order to address the issues around those barriers and ramps, Carra said they will try to move most of the patios off of the sidewalk and reduce disruption to passing pedestrians, cyclists, scooter users, and people with mobility issues.

“We’re reverting to the best practice, which is that we’re allowing the patios to exist in the parking lane,” he said.

In cases where the patio is in the parking lane — which was already done by some businesses around the city last year — the sidewalk will be unimpeded.

He also wants to make the program free of cost so businesses spend money on making patios look attractive and he’s in favour of some adjustments to address accessibility concerns that we saw with those makeshift ramps.

Carra says this time, they want to put the patios in the parking lane and keep sidewalks clear.

“If you had a stroller or wheelchair it was very problematic and that’s why we’re moving the patios onto the parking lane.”

Carra says one of the silver linings of COVID-19 was how lovely it is to see restaurants spilling out into the streets.

However, this does come with a new set of concerns, added another inner-city councillor for Ward 7, Terry Wong, who says this may also pose problems and looks forward to discussing the plan a little more.

Wong says some businesses are worried staff and pedestrians may collide while taking orders out to the patio.

“You can imagine the hostess carrying a tray of food across the sidewalk, with pedestrians walking back and forth. Their concern is dropping it, their concern is running into a pedestrian and spilling a bowl of soup on somebody,” said Wong.

Wong adds we also have to make sure we limit collisions between staff and pedestrians and prevent people from dining and dashing.

Wong said they will still have to work out some finer details of the plan as it is set to be discussed during a committee meeting at City Hall on Thursday. For example, making sure payment machines can still work.

“You walk into a street to get a credit card and if they say ‘I’m sorry you can’t do that, please walk into the store and pay for it,’ right that’s an inconvenience,” says Wong.

No matter what, though, businesses are excited to welcome people back into the sunshine and try to boost their revenues in any way possible with no COVID-19 restrictions in place.

“It gives them another chance to fight back from the last two years of devastating revenue losses,” said Ernie Tsu with the Alberta Hospitality Association and owner of Trolley 5 on 17 Ave.

“The largest advantage for all the extended patios around the city was the vibrancy, bringing some much-needed vibrancy back to the city, that punch in the arm and that little bit of an energy burst,” said Tsu.

“We saw a lot of good usage of the patios,” added Annie MacInnis, executive director of the Kensington Business Improvement Area. “I think it was a way for people to feel comfortable and also get out and have a conversation with other people, and a meal out, and still feel safe.”

As for the concerns brought up by Wong, when it comes to one of the city’s main drags there shouldn’t be any issue about interference between servers and pedestrians.

“17th Avenue will not be going out to the first lane of traffic,” said Tsu. “The [Business Improvement Area] for 17th Avenue has done a wonderful job this year, we’re going to build boardwalks for that wheelchair access.”

Tsu added this may be a problem for other communities and they have voiced concerns directly with city council so there is hope an amenable solution is found.

MacInnis said some businesses in Kensington have also spent good money on boardwalks to keep their extended patios on the sidewalk but also have equal access for pedestrians and other people passing by, but most other places will be taking advantage of moving into the parking lane.

“I think most of the business improvement areas were keen to see an end to the orange barricades, it made us look a little bit too much like construction zones. We’re going to have our own fencing in most cases this year, we’ll still look at heavy planters or something to help with that safety factor, but I think there will be more customizing and a better aesthetic to the patios this time around.”

Wong also said there may also be an issue with making sure patrons pay when they are on these extended patios, such as if debit machines don’t work or people just dine and dash.

The hope is that people have realized how businesses have done everything possible to stay afloat over the past couple of years, and won’t try to take advantage of a situation like this.

Carra is also planning to put forward a proposal to waive the fees for the extended patios, just as extra help to ensure every cent can be put back into the business or also help make the patios even nicer and add the security that may be needed through fencing to make sure there isn’t a widespread problem of dining and dashing.

“It’s a much-needed time for everybody just to be one as a community again, we’re excited,” said Tsu.

“I think that we’re all anxious to get back out into the world and maybe we’ve all got a bit socially awkward with all this isolation, and I think patios are a great way to reintegrate into society,” said MacInnis.